My Memories of Dad 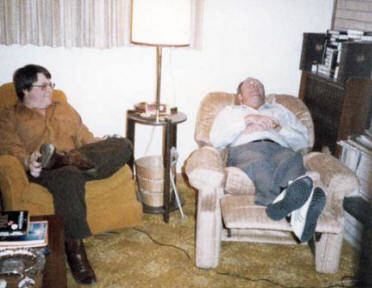 I remember Dad at trail rides in Brown County back when I was young. Camping out and the pilot light on Marilyn Paton’s camper heater always blowing out.

I remember his strength and determination.

I remember him sitting in the announcer’s stand while I ran the judge’s cards up to him at the old Wanamaker show.

I remember his buying one of those newfangled video cameras in 1979 as a "deductible business expense" to video the horses Mom had in training.

I remember him traveling constantly announcing shows and events while I was elected, or more to the point drafted, as cameraman.

I remember his urging to start videotaping clients horses at shows for pay and making $750 at the first weekend show I videoed at 15 years of age.

I remember him ripping a painful strip of hide off of me for something I’d done wrong... without raising his voice or touching me in any way.

I remember him encouraging me to study Broadcasting in college since I was already making money by videoing horse shows.

I remember when we moved from the farm to the lake and he came up with a better name for my video business than Custom Videos by Scott Cooper. His reasoning was that a video production company specializing in Arabian Horses would make videos allowing clients to see their horse, thus Seehorse Video.

I remember sitting next to him at a show watching him announce a Stallion presentation from copy he’d been handed literally seconds ago. He was reading several paragraphs down in the copy while he was rewording and announcing the paragraphs at the top of the page. I never did figure out how he managed that.

I remember when we were shooting some video at a Golf tournament and one of the security guards approached asking for our credentials... he pointed to my college jacket with the university TV station logo on the back and reached into his inside jacket pocket saying they were right here... the guard walked away without ever noticing that no credentials existed.

I remember the Hawaiian cruise we went on and how he had to join us a day late after flying in from an event he’d contracted to announce.

I remember the time in Scottsdale when he had "colic surgery" and how he’d been working out at the gym the day before with a ruptured intestine because as he put it "Everyone said something that serious should hurt more". None of the doctors could believe he walked into the hospital on his own, much less that he’d been doing squats with 200lbs on the barbell the day before. I’m convinced that it was that tremendous strength of will that let him survive 5 years past the point that all his doctors were convinced was possible.

I remember him hearing that you could paint vinyl upholstery and deciding to touch up the fading upholstery in the old Century boat, never realizing that you needed a special paint or it would forever stay tacky.

I remember him as a vibrant and active person, even after the emphysema took hold of him and he started on oxygen. Every day he’d play golf or go to the range and hit a bucket of balls. As his health began to fail the range allowed him to park right next to the door. Only he could park there, nobody else. They always had a golf cart waiting for him.

I remember when the doctors said he wouldn’t live more than a few months back in 2005 and he leased a new Ford Expedition. He figured since the lease would terminate with no further payment due when he died the only way he could loose the bet on the lease was to live. We ended up paying out the lease, buying the vehicle and then paying off the loan while he still was driving his truck.

I remember him driving me to the gravesite he and Mom had picked and showing me the tombstone sitting there engraved with his bronze "Voice of the Arabian Horse" plaque mounted and how much I hated seeing it and not wanting to think about him ever being gone.

I remember how he loved to take an ocean cruise, and how he and Mom tried to take one every other year or more. There wasn’t much he loved better than to stand on his private balcony and watch the ocean go by.

I remember him falling terribly ill in September and sitting with him for hours. He said to me "I like to think I can get better one last time." Well, he did get better... one last time. That’s my most vivid memory right now.

The night before he began his final decline he said he’d had a dream. He said that he’d been inside the house and had a spider on his face keeping him from breathing, then he went outside and suddenly he could breath perfectly and everything was all right. Three days later he was gone.

The morning he went to the hospital I remember he looked at Mom and asked if she’d called the mortician. She replied no, he was still with us. That was the last fully coherent thing I ever heard him say.

Immediately before the ambulance arrived while I was on the phone to 911 he looked to Mom and said "I’m dying aren’t I? I love you" . As far as I know that was his last coherent sentence.

It’s no easier when it happens after years of decline. He’d won so many battles over the last ten years that we all hoped he could win yet another... but in the end he lost the war at 12:35 PM November 22, 2010. I hope that his dream came true and he can again breath perfectly.